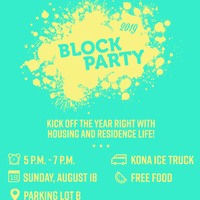 Join Housing and Residence Life from 5 to 7 p.m. Saturday, August 18 in Lot B to kick off the school year with Block Party, featuring The Ethan Bell Band, Kona Ice, a cookout, and free t-shirts to the first 500 attendees!

With their skillfully led instrumentals, creative cover mashups and new songs that blur the line between country, pop and hip-hop, The Ethan Bell Band has been humbly compared to its influencers: Zac Brown Band and Florida Georgia Line.

While currently playing more than 125 shows a year in the club, casino and festival circuit all over the Midwest and Nashville, The Ethan Bell Band has already opened for Chase Bryant, The Marshall Tucker Band, Love and Theft and Dylan Scott.

The band's first two singles, "Party Bus" and "Hold You Now," are gaining buzz and its first EP will drop later this year.