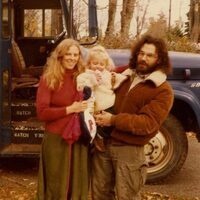 Professor Beverly Seckinger of the University of Arizona School of Theater, Film and Television will present the film Hippie Family Values (2018) in Kleymeyer Hall at 11 a.m. Friday, March 27.

Hippie Family Values is a feature-length documentary about three generations at a back-to-the-land community in rural New Mexico. Shot over a period of 10 years at a remote communal ranch, Hippie Family Values is an intimate chronicle of a handful of hippie elders, along with their adult children and grandkids. The film counters dismissive stereotypes with stories of real people whose worldview was forged in the 60s counterculture, and who remain motivated by those youthful convictions. The founders of this back-to-the-land experiment are slowing down and facing declining health. Will the next generation be able to sustain the community into the future?

Fifty years after the Summer of Love, the don’t-trust-anyone-over-30 generation now dotes on their grandchildren and faces the challenges of advancing age. The elders profiled in the film continue to defy convention as they pursue communal alternatives to commercial retirement facilities and nursing homes.

The film continues to screen in community and campus venues across the country. \

This event is sponsored by the USI Center for Communal Studies.