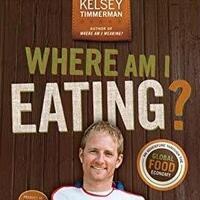 Knowledge for Life Series Presents: "Where Am I Eating? An Adventure Through the Global Food Economy”

Kelsey Timmerman empowers with a think globally, act locally mindset while introducing audiences to conscious consumerism. America now imports twice as much food as it did a decade ago. What does this increased reliance on imported food mean for the people around the globe who produce our food? On his four-continent farming adventure, Kelsey worked alongside the farmers who grow coffee for Starbucks in Colombia but haven't heard of Starbucks, met and freed a slave in Ivory Coast, and hung out with the farmers responsible for 2/3rds of the apple juice on American shelves. Kelsey shows how our eating habits impact the lives of the people who produce our food, touching on topics such as workers' rights, global food insecurity, fair trade, slavery, and immigration. Kelsey does not argue for or against the globalization of food, but personalizes it by observing the hope and opportunity, and sometimes the lack thereof, which the global food economy gives to the world's poorest producers.