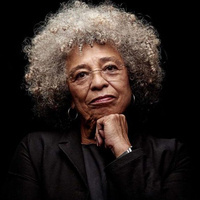 Iconic activist, author, and professor Angela Davis has made it her mission to share her life story and challenge her audiences to join the struggle for racial, economic, and gender justice.

Angela’s outspoken ways made her a focal point of criticism. Her radical ties led then-California Governor Ronald Reagan in 1969 to try to bar her from teaching at any California university. The attempt failed; she is now professor emerita at the University of California, Santa Cruz, in its History of Consciousness Department.

Angela has campaigned for social justice – particularly with what she calls the “prison industrial complex” that has grown since the 80s with the emergence of the private-prison industry. She is one of the founders of Critical Resistance, a national grassroots organization fighting for changes in the prison system. Her books include Are Prisons Obsolete and Abolition Democracy: Beyond Empire, Prisons, and Torture.

Angela writes and frequently speaks as part of her mission to build engaged communities that seek to reform the U.S. prison system. She urges her audience to “hone their critical skills, develop them and implement them" while fighting for racial, economic and gender justice.

See the film Free Angela and All Political Prisoners on January 30, as a part of the Africana Studies Film Festival.

Prior to the discussion on February 5, join us for a Social Justice Activism Fair in the concourse leading to Carter Hall.

Dr. Davis is a light for many people experiencing darkness. She discussed her prison time facing the death penalty. She was acquitted through community support. She stressed the fact that movements are never just one person but a community of people. And, she encouraged us to push forward with strength and self care along the way. I completely enjoyed it and recommend it.